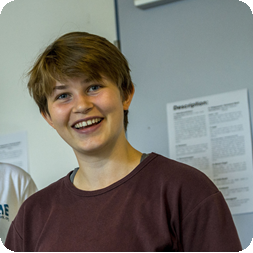 If you had asked me a couple of months ago, what I would be doing after the summer holiday, I would have probably answered, that I would be finishing my gymnasium, living at home in Denmark, and doing board work for OD Denmark. Now, a couple of weeks into the Danish school year, none of that is true. Instead of going back to school, I moved to Lübeck in Germany, and the next year I will be doing a volunteer service for SAME.

On the 14th of July I put on my backpack and got on a bus towards Germany, first stop wasn’t Lübeck, but instead a small German village called Gokels. Here I meet not only the people, who are doing their volunteer services for SHL, but also Merjem who is going to be my co-volunteer for the next year. It was pretty nerve-racking meeting the person, that I was going to live and work with for the next year, but Merjem turned out to be both welcoming and open, I am looking forward to our next year together.

After a week in Gokels talking about our volunteer service in general, and getting to know each other, it was time to learn, how to work in an office. Therefor we went to Neumünster with the SHL volunteers, as SHL has one of their offices’ there. Our time in Neumünster was cut short by the start of the SAME Summer Academy and general assembly. At the Summer Academy I got, to meet all the amazing samies, some I had met before, others I got to meet for the first time, but talking to people and seeing their passion both for their own organisations, but also for the SAME network really gave me the motivation, to work for SAME the next year. I can’t wait to work with all the different member organisations and action day initiatives.

After the Summer Academy and a few days’ break it was back to the office. Here Merjem and I got a more thorough presentation, of what we will be doing the next year. We will be preparing stuff like seminars and workshops, as well as working with youth in Lübeck and new action day initiatives. If you write or call SAME the next year, maybe we will be the ones answering.

Looking forward, I feel very grateful getting this opportunity, to work with and for an organisation, I really believe in. Getting adjusted to living in Germany and working full time is probably going to its challenges, but I know that, 10 out of 10 it will be an adventure, that I will probably remember for the rest of my life.